Tips How to Facilitate LGBTQ+ Inclusion in the Workplace

Your business can greatly thrive if you have an inclusionary workplace. LGBT inclusion is important that you have to make sure that everyone feels safe and welcome in your workplace.

Here are some tips on how to make your workplaces more inclusive and fit for LGBTQ+ staff. 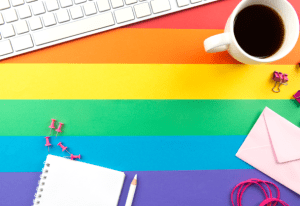 What is the LGBT Community?

The LGBT community refers to the lesbian, gay, bisexual and transgender community.

Most of the LBGT comprise the American workforce and the global work force in general.

It helps to understand who these people are and how they deserve equal treatment among their heterosexual peers.

LGBTQ+ refers to the lesbian, gay, bisexual, transgender and queer community. The + refers to others in the spectrum such as intersex, those born with both female and male biological traits and others including asexuals and aromantics hence the additional label +IA.

This means that you have to ensure that members of the LGBT feel safe and supported and are not discriminated on the basis of their gender identities and self expression.

10 Tips How to Facilitate LGBT Inclusion in the Workplace

Having LGBT policies in your HR manual is paramount. This is crucial for putting guidelines out on how to become more inclusive and how to avoid discrimination. This inclusion must be a core part of your Equality and Diversity policity, and having a separate policy for LGBTQ+ can ensure that members of the gender queer community feel safe.

Provide training and diversity seminars for your employees. Yes include the straight people but this is for everyone in recognizing the issues which the LGBT face on a day to day and making sure that none of those discriminatory practices are inside your organization.

3. Include LGBT Members in Conferences

If there are critical conferences where people must have a say then something as simple as including them in those conversations can greatly enhance their sense of inclusion and feeling a part of your organization. Asking them questions giving them a voice when they must speak is absolutely paramount.

4. Set up an LGBTQ+ Safe Space

You can also include an LGBTQ+ safe space in the office where members of the LGBT can chat among themselves. The only issue here is it might further divide them from other members of your workforce. But having an LGBT area where there are LGBT motifs and all staff are free to join? Why not.

Making them feel empowered and a huge part of your company is going to go a long way in your inclusion policies.

A lot of liberal folks in the workplace may want to air their support for the LGBT+ community and allowing them to do so gives more freedom and a recognition of your gay and lesbian colleagues where all sexual orientations are voicing support for their inclusion and talents.

6.Include special pronouns in the office

If you're up for it you can also include special pronouns for those who may be intersex or trans. He or she or they/them may not be as binary as you think it is when it applies to the LGBT community.

You can make it a policy to add pronouns in signatures and emails to make sure that heterosexuals and LGBT's can unite and assert their own gender identity.

You should make it a point to place LGBT community members in leadership positions. If they perform well, this should always be the basis for promotion and this shows all your staff that you value the opinions and the strengths of those who are among your queer counterparts.

You can include national pride day or trans day of visibility among your holidays to celebrate. If you can make it an official policy to make these paid holidays? Then great, but if you cannot, then at least recognizing these special days is an important step in making LGBT recognition official.

9. Collaborate with LGBT staff in drafting your policies

Include your staff in drafting your policies. Make sure they have a voice. Rules like not allowing people to behave hostile or to use discriminatory slurs are good to enforce so that your workforce can peacefully co-exist in the same space. It also helps if you allow your LGBT staff to draft policies in general. This means they have a say in all affairs, and not just those pertaining to their issues.

10. Promote acceptance and inclusion in general

You can also promote acceptance and inclusion in general. For example, you may employ older employees and those who are past their senior years as long as they are able and make them active members of your staff.

How Inclusion is Intersectional with Payroll

Inclusion is for all genders and those in your organization, that said the principles of

These all contribute to satisfaction in the office. Our LGBT peers need our support and acceptance to know they have a voice and they matter

Create a pay stub now for faster payroll to increase job satisfaction and show support to your staff.

Generate a Pay Stub
It takes an average of less than 5 minutes.
How are you paid?

What Is A Pay Period?
Scroll to top